The Ellen DeGeneres Show selected Russ Weinzimmer’s patent services as a “gift” to a young nationally-recognized inventor. The boy’s invention took Third Place in the 2005 INVENT AMERICA! national inventors’ competition that invites children each year to submit their inventions.

The boy, Kyle Power, age 11, appeared during a new segment entitled “Who’s Your Hero?”, for inventing a special wearable physical therapy device for his 5 year-old sister. The invention will help his sister Casey to someday walk without pain or weakness. Ellen DeGeneres began presenting the “Who’s Your Hero?” segment only the previous week. Kyle Power was the third recipient of that honor.

Ellen DeGeneres surprised the entire family during their television interview by introducing patent attorney Russ Weinzimmer, who was secretly seated in the “Donations Box” in front of the live studio audience. Russ then explained on camera the usual time-frame and costs of patenting, but that he will help the boy patent his invention at no cost to the family. The work will be done entirely “pro bono” (short for “pro bono publico” in Latin, which means “for the good of the public); he will receive no money for the work.

The boy’s Mother reacted with tears of joy, and the young inventor was obviously quite pleased and impressed. 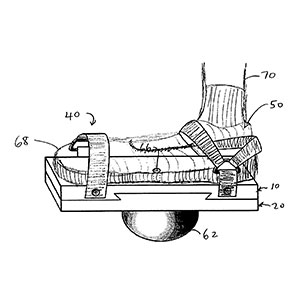 The inspiration for Kyle’s invention came to him after his sister’s physical therapist recommended that she walk on cushions and pillows placed on the floor to improve her strength and balance. Kyle found that method to be unacceptably burdensome, so he worked to find a solution for his sister that would be more efficient and less messy.

Russ succeeded in obtaining an issued patent for the boy.

At the end of the show, Ellen thanked Nicolette Sheridan, Jamie Kennedy, and Russ Weinzimmer for appearing on the show.